December 16, 2012
I have been looking at the viewership statistics for the one post that I did on the 1962-63 commemoratives with some dismay. It seems that most of you are not that interested in the post-independence issues. Maybe I'm mistaken. It is indeed a pity if I am, as the post-independence period has so much to offer, as I hope the next few posts will show. Indeed, Nigeria is one of the few countries, now in the whole world, where the number of basic issued stamps is still under 1000 basic catalogue numbers. My country, Canada, which has a very reasonable new issue policy has issued over 2,400 stamps. Nigeria, in contrast had, up to 2008 still issued fewer than 900 stamps. In addition, it is one of the few countries whose stamps illustrate subject matter that is relevant to the country and its people.

On January 1, 1961, just 3 months after the country declared its independence, a new definitive set appeared to replace the previous pictorial issue. Gone are the images of Queen Elizabeth II and the Tudor Crown. Like the previous set, this one shows scenes from Nigerian life. But an important difference is that Nigeria is now portrayed through the eyes of its people, rather than from the old colonial perspective of a British possession. 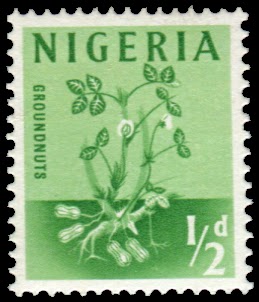 1/2d Emerald green - groundnuts. This stamp exists in coils constructed from normal sheets and there are a few distinct shade varieties to be found. 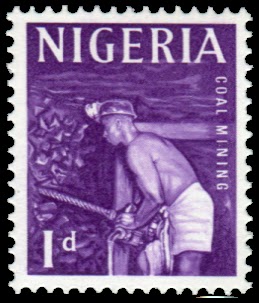 1d reddish violet - coal mining. This is the first time that the coal mining industry is depicted on a Nigerian stamp. It is difficult to imagine anyone doing such a dirty and dangerous job wearing so little as the miner that we see depicted on this stamp. This stamp exists in several shades, most of which are but subtle variants of one another, as well as coils constructed from sheets and booklet panes of 6. 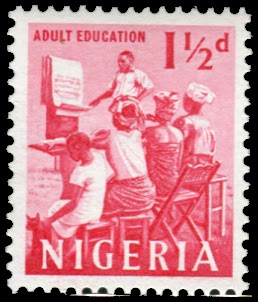 1.5d carmine-red - Adult education. This is the first time that the topic of education and its importance is addressed on a Nigerian stamp. the stamp depicts a classroom in which adults and a young teenager alike are learning. This stamp exists in two shades and is quite scarce in fine used condition. 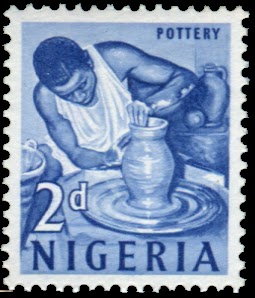 2d Deep blue -  Pottery. This is the first time that pottery is depicted on Nigerian stamps. All of the country's  ethnic groups are highly practiced in the art of pottery. This stamp exists in at least three shades of the blue, which are quite distinct, as well as some fluorescent paper varieties. 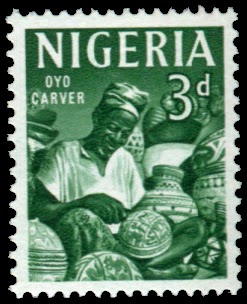 3d Deep green - Oyo carver. The stamp depicts a Yoruba man from Oyo State, carving a calabash. The calabash is a common, all purpose vessel used to contain food and other items. Oyo state is in the southwest corner of the country and Ibadan is the capital. This is one of the most common stamps of the 1960's and is plentiful in used condition. It exists in coils and booklet panes, and there are shades of the green, as well as different types of inks, whose differences can only be seen under ultraviolet light. 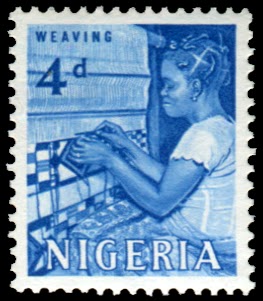 4d Blue - Weaving. Again, this is the first time that weaving is depicted on a Nigerian stamp. There is at least one subtle shade variety to be found on this stamp. This is also one of the scarcer values of the set in used condition. 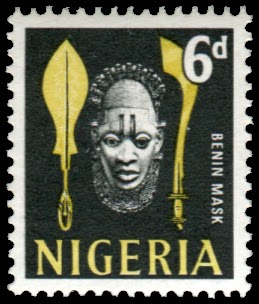 6d Black and yellow - Benin Mask, Sword and Dagger.  This is a famous mask that was worn by the Oba, probably around his neck, during the Emobo ceremony. The pendant is said to represent Queen Mother Idia, mother of Oba Esigie, who ruled in the 16th century. The top of the mask is decorated with heads that represent the Portuguese. This is symbolic of the Alliance between the people of Benin and the Europeans. 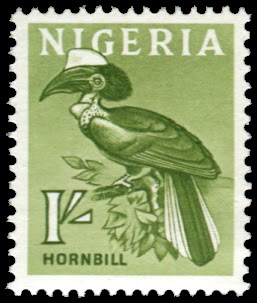 1/- Green - Hornbill. The hornbill is a family of bird that is found in Su-tropical Africa, Asia and Melanesia. They are known for their strong, downward curved bill (beak). There are over 55 species of these birds, some of which are threatened with extinction. They nest in natural cavities in trees and cliffs and they are omnivourous, eating fruit and small animals. 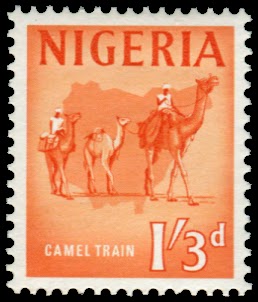 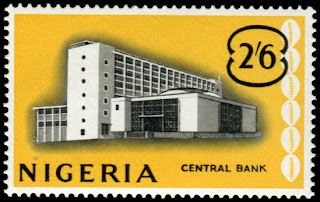 2/6d Bright yellow and black - Central Bank. The central bank building is located in the central business district of Lagos. It was regarded as the model of elegance when it opened originally. In recent years, it has been remodelled, by building a 19 storey complex surrounding the original building. There are several shade varieties of this stamp, including several that can only be seen under ultraviolet light. 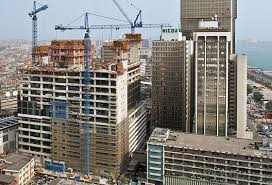 Now. The original building is located on the right of the photograph. 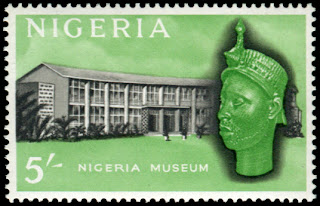 5/- Emerald and black - Nigeria Museum. I looked for a reference to an old museum building in Lagos, but was unable to find anything online. The bronze sculpture shown on the right is the famous Olukun Head, which was discovered in 1910, buried in a palm grove, near the city of Ife. It was sent to  the British Museum in 1948 and has been exhibited there ever since. It was originally shown as a copy, which was thought to be too sophisticated to have been produced by African hands. Modern science has since debunked this theory and shown the sculpture to indeed be genuine. There are at least two shade varieties of the green and I have seen examples printed on a highly fluorescent paper as seen under ultraviolet light. 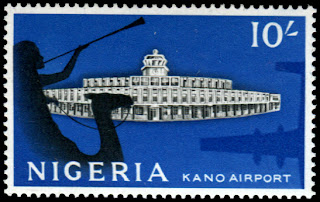 10/- Blue and Black - Kano Airport and silhouette of northern trader riding a camel. The airport is called Mallam Aminu Airport, and is actually named after the politician Aminu Kano. It is the oldest airport in Nigeria, and was opened in 1936. A new domestic terminal was constructed in 2011 and in 2009 the airport handled just over 325,000 travellers in the year. The airport historically had served as an important fuel stop for airlines that had long-haul flights between Europe and Africa. This much of the airmail destined for Europe and the Americas was routed through this airport.  KLM is currently the only foreign airline that serves this airport and has consistently done so since 1947. 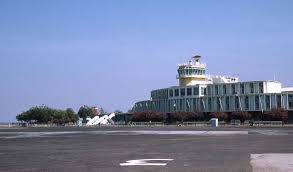 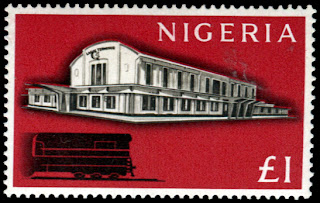 One Pound Brown Red and Black - The old Iddo train station, Lagos. This was an updated version of the old Iddo station that opened in Lagos in 1895. This remodeled station was opened in 1958 and was fashioned after Victoria station in London. It fell into disrepair in recent years, as the Nigerian Railway Corporation went bankrupt and railway service rapidly declined. However in the past few years, the Nigerian government has resurrected the NRC and has restored railway service, building a new train station to replace this one.