My First Post of May - Exciting Acquisitions of Late: One Shilling Vickies and A Stunning Biafra Cover!

May 10, 2013
First of all, I would like to express my sincere apologies for taking so long to post. I had said I would be posting prolifically this month and we are already at the 10th. I am about to leave on vacation for a week, so I thought I had better post something before I go.

March and April were very exciting months for acqusitions, as I was able to secure several very rare items for my collection. One of the things I have been able to let go of over the years as a philatelist is my insistence on perfection. This has stood me in good stead, as Nigeria is a country that is very challenging from a condition point of view. Many of the rarest stamps are simply not available in the condition that many North American collectors are used to insisting on.

The first of these key purchases were all three of the crown CC one shilling orange Lagos Queen Victoria Issues shown below:

These stamps were issued between February 1875 and 1879 and were printed by De La Rue. The two stamps on the left are both perf 12.5, while the one on the right is perf 14. In addition to the perfs, there are very noticeable differences in the shades of orange, with the right hand stamp being a distinct red-orange, while the one on the left is yellow-orange. The difference between the two stamps at the left, lies in the width of the inscription "one shilling". The first stamp, which was issued in February 1875 has the inscription measuring 15.5mm, while the stamp in the middle, which was issued in July 1875 has a 16.5mm inscription.

1. The catalogue value is not a good indicator of scarcity in many cases, and
2. Perfection is often not attainable, but stamps can be imperfect, and still very collectible

I have been buying daily on e-bay and Stamp Auction Network, and I can tell you that I have only seen maybe 5 or 6 mint examples of any of these three stamps offered for sale in the past four years. Nigerian material in general is scarce, but the infrequency with which these are offered, tells me that these are phenomenally rare stamps. In used condition, they are are readily available, though nice examples are still rare. However, the catalogue value suggests that they are merely pricey and scarce. There are lots of stamps that catalogue in the 300-400 pound range in Gibbons that are quite readily available to the buyer with deep pockets, but not so with these stamps. Of the 5 or 6 mint stamps that I have seen, all have been the more common middle stamp with the 16.5mm inscription, and three of these had no gum. I have never before seen an example of either the 15.5mm perf. 12.5 crown CC, or the perf. 14 crown CC.

This brings me to my second point: condition. The two perf. 12.5 stamps at left are in fantastic condition for this issue, being well centered, with full perforations. But at first glance the perforations seem a bit rough and irregular. However, many stamps of this issue have short or pulled perforations, so to find examples with full perfs is a delight. Also, both stamps have original gum, although it is heavily disturbed from prior hinging. Again, this is a delight, as experienced collectors can tell you that most mint stamps of the crown CC period have no gum at all. The right stamp has a couple of pulled perfs at the bottom right and a small surface scuff, which bring the grade down quite a bit. However, the colour is fresh, there is full original gum and I have no idea when I will see another, better example. When I do, I will replace this one, assuming that I can afford the stamp at that time.

The second exciting acquisition is the cover illustrated below, which was from the Biafran Civil war: 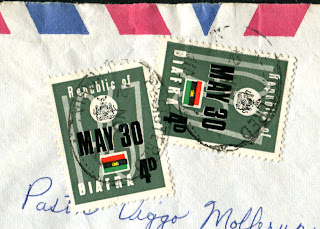 The fascinating thing about this cover lies in the route that it took, as indicated by the cancels and the dates of those cancels.

If you look at the 15c Canadian Centennial definitive, the postmark date is October 31, 1968, and the cover is addressed to Copenhagen, Denmark, with the definitive paying the first class airmail rate to Denmark. There is a November 4, 1968 receiving backstamp in Danish, proving that the cover arrived in Denmark.

But then, in the middle of the cover, are two 4d Biafran Independence stamps, cancelled on November 12, 1968. The Umahia registered oval cancels, just tie the stamps to the envelope. Although nearly all of the cancel falls on the stamps, the cancels tie the stamps to each other, and the M of Umahia is clearly appearing on the envelope. Examination under high magnification reveals the ink to be the same as the rest of the cancel, and not drawn in after the fact. So there is no chance that these stamps were not originally on this cover. Clearly, somehow, this cover wound up in Biafra between the time it arrived in Copenhagen on November 4, 1968 and the day it was mailed back from Biafra on November 12.

The most likely explanation is that it was taken by the recipient, back to Biafra by mistake, and then sent back. Biafran stamps were not recognized by the U.P.U. as valid for postage, so consequently, there is a "T" postage due marking on the envelope, just below the Centennial definitive.

Biafran covers are very rare, with only one cover cropping up for sale every year or so. This one, I like especially because it has three points of interest: a postage due marking, it is from Biafra and it features the Centennial issue of Canada.