October 24, 2017
Today I continue my examination of the printings of the 4d lilac and black Queen Victoria definitive from Lagos, with the printings made from the third state of the plate. In this state, there is an almost complete loss of detail in the hair at the back of the head, and merging of the top 3 or five hairlines at the top of the head, and the first 2 or three lines of hair within the jewels of the crown.

In this group of printings, mint and used examples are fairly evenly matched, and on the used, the barred oval obliterator cancels predominate, though there are a few early CDS's. I have one cover from this period, and one large mint block of 12 of the last printing in the group.

The head plate colour of this printing is closest to Gibbons's dull mauve, but without the brownish undertone that the dull mauve swatch has. It is a perfect match in terms of the overall intensity, and general tone. The other lilac swatches contain far too much red tone to match this colour. So I would call this dull mauve. I have five mint examples as shown above, and four used examples as shown below:

These appear to be cancelled with predominantly 8-bar oval obliterators, and one example of the wider Lagos CDS that became popular in the late 1890's (i.e. after 1896).

The colour of this printing is almost identical to the seventeenth printing, but is just a touch darker. I do not have any mint examples, but just the above three used examples. The stamp on the left appears to have been canceled with a 9-bar oval, but it is hard to say for sure. The stamp on the right bears the smaller 20 mm Lagos CDS. The date on this is somewhat indistinct, but it is likely before 1897, as there are very few instances of this cancel after 1896. The middle stamp, which unfortunately has a vertical crease, is cancelled with a fantastic 23 mm Lagos CDS from January 19, 1899. Given that these printings are supposed to encompass the period to 1895, this is likely another example of a late usage. 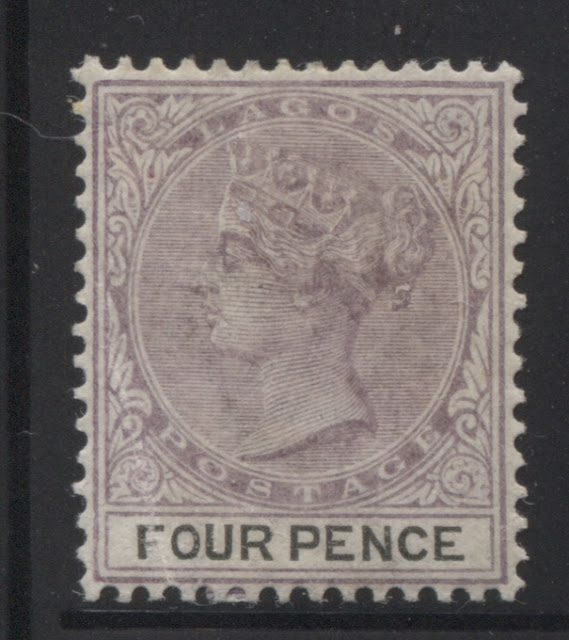 The head plate colour of this printing is closest to Gibbons's dull purple, but is just a bit paler. I only have the one mint example, which unfortunately has a small diagonal crease in the lower left corner. 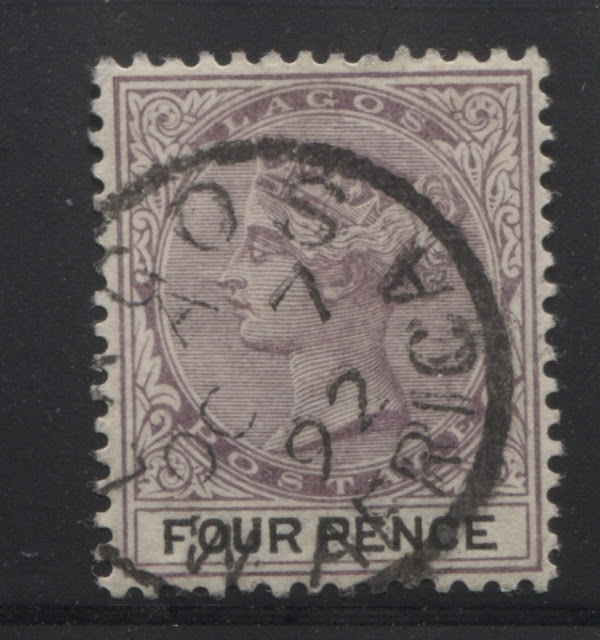 The head plate colour of this printing is a very distinct deep dull purple, which is much deeper and richer than most of the pale colours that thus value is normally found in. I only have the one used example. However, it is cancelled with a lovely strike of an October 7, 1892 20 mm Lagos CDS. 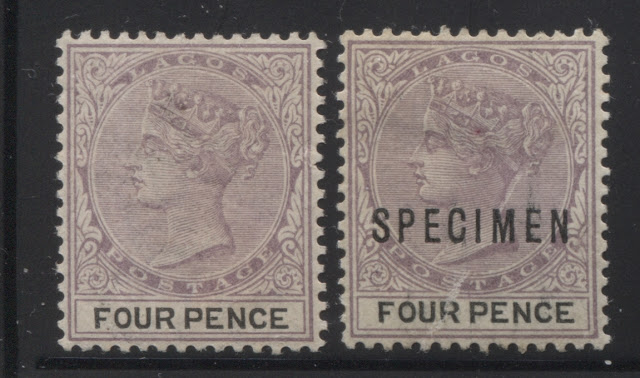 On this printing, the head plate colour is closest to Gibbons's reddish lilac, but is both slightly paler and duller. It does not have the brownish tone of the dull mauve, and is too lilac to match the dull purple. I have the two mint examples shown above including one with specimen overprint. As stated in other posts, it is well known that the specimens were distributed over the life of the issue, and that one cannot assume that a specimen overprint is from the very first printing. 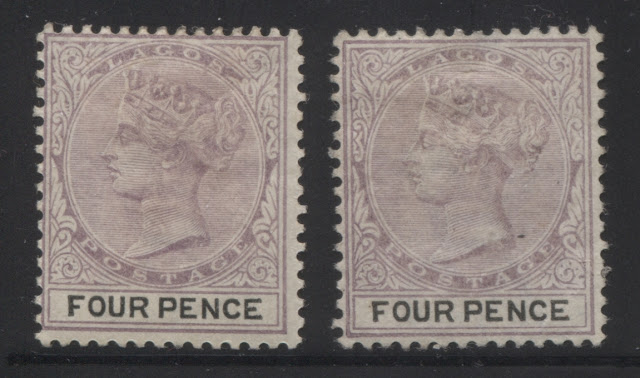 This printing is very similar to the last, but the colour is just a little paler, and more reddish. I have the two mint examples shown above only. 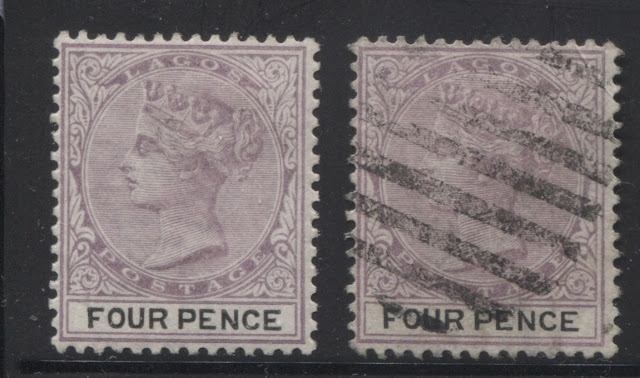 The hear plate colour of this printing is closest to Gibbons's reddish lilac, but is just a little paler. I have one mint example, and one used example, which appears to have been cancelled with a 9-bar oval strike. 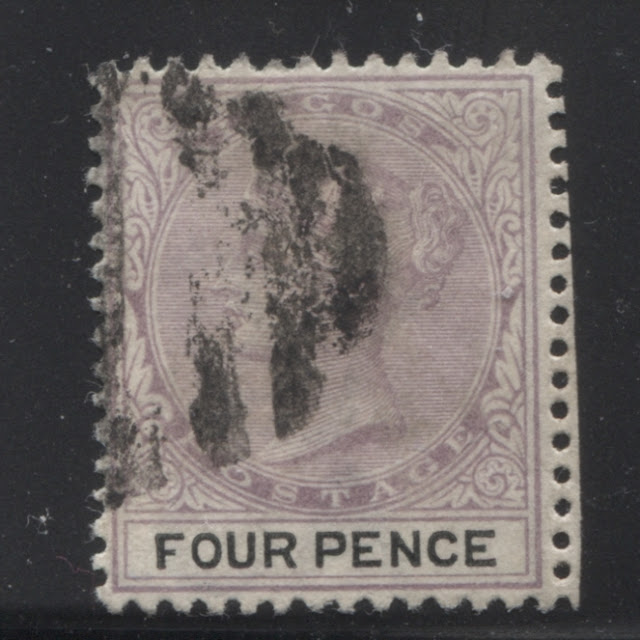 The head plate colour of this printing is closest to Gibbons's dull mauve, but without the brownish undertone which that shade has. I have only the used example shown above, which is cancelled with an 8-bar oval obliterator. 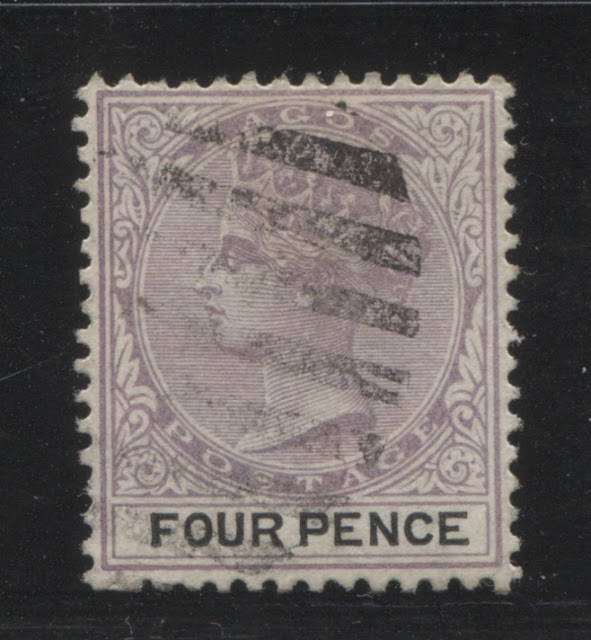 On this printing, the head plate colour is closest to Gibbons's lilac shade, but with a little grey added to the colour. It has a definite bluish undertone that the other shades examined so far do not have.

I have only the used example shown above, which appears to be cancelled with a 9-bar oval obliterator.

The head plate colour of this printing is closest to Gibbons's slate lilac, but is just a little paler. I have no mint examples, but just the three used examples shown above, all of which are cancelled with a barred oval obliterator. The two stamps on the end are cancelled with 8 bars, while the stamp in the middle is cancelled with 9 bars.

The head plate colour of this printing is closest to Gibbons's reddish lilac, but is perhaps, just a little bit deeper. I have the three mint examples of this printing as shown above, as well as one example on a registered cover to Bavaria, which is dated August 6, 1895. 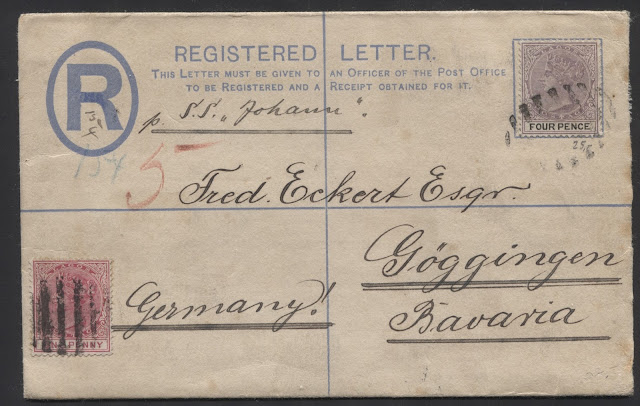 Below is a close-up scan of the stamp, where you can see that the colour matches the three mint examples: 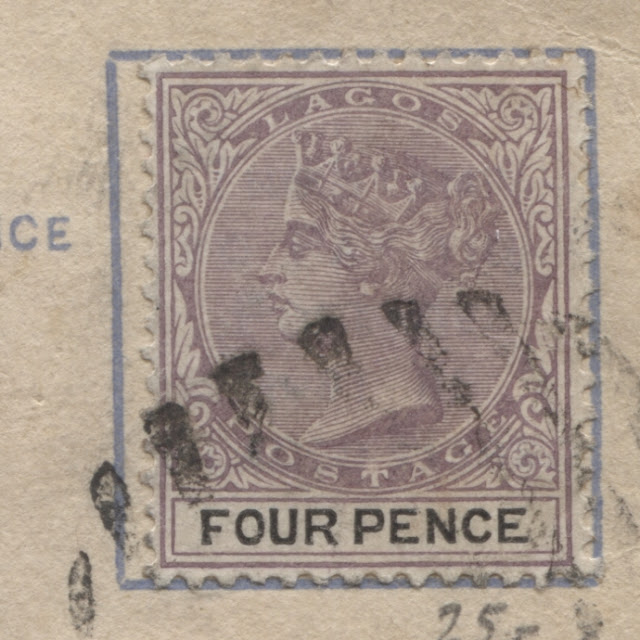 The colour of this printing is a perfect match to Gibbons's reddish lilac. I do have the two mint examples shown above, which unfortunately have defective perforations, and one used example. The used example is cancelled with an 8-bar oval obliterator.

This printing is very similar to the last, in that the colour is a near perfect match to Gibbons's reddish lilac. However the colour of the stamps in this printing are a little milkier than the colour of the 28th printing. I have two mint examples, and one single used example, which is canceled with what appears to be a 9-bar oval obliterator. 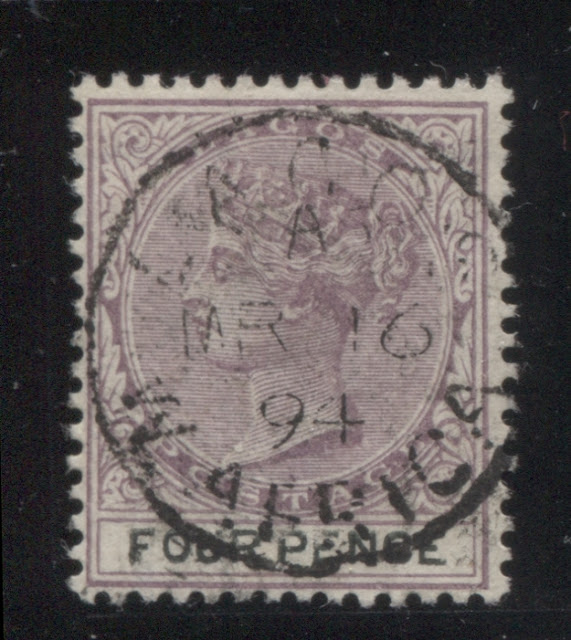 On this printing, the head plate colour is closest to Gibbons's dull purple, but is just a little paler than the Gibbons swatch. I only have the above used example, which is cancelled with a lovely strike of a 20.5 mm wide Lagos CDS cancel, dated March 16, 1894.

On this printing, the head plate colour is closest to Gibbons's plum, but both slightly paler and duller. I do not have any used examples, but instead this fantastic mint block of 12, representing two complete rows of the sheet, though I am not sure which rows. There is no upper or lower selvage, which suggests that it is from between rows 2-9.

A close up scan of the third stamp from the left in the top row is shown below: 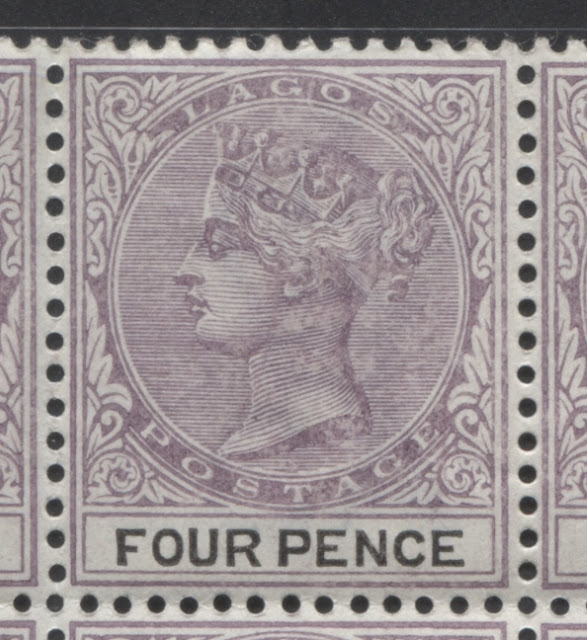 As you can see, there is some merging of the top hairlines and very little detail left in the hair on the back of the head, which is characteristic of this state of the plate, as discussed.

In addition, this block contains a very spectacular plate flaw - perhaps the best one of the entire period since 1874 - a double frame break, consisting of a large diagonal gash at least 2 mm wide that affects both the outer frameline at left, and the inner frame that normally encloses the value tablet. Much smaller breaks are generally considered highly desirable, but this one is exquisite! The close up scan is shown below: 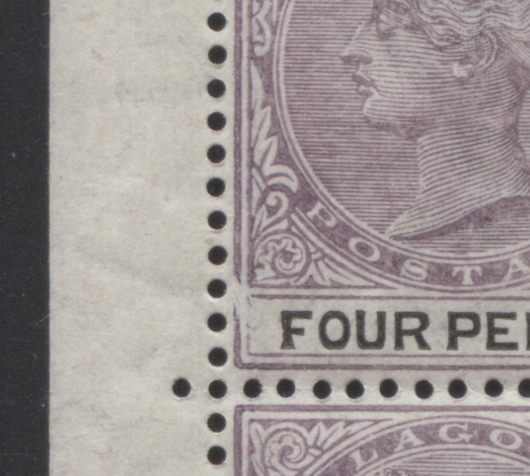 I do not know if this was a constant flaw or not, but I assume that it was. I haven't seen it on any other 4d stamp, or indeed any other Lagos stamp from this period, which leads me to conclude that it either results from damage to the plate that occurred to the plate during this period, which was quickly repaired, or it results from foreign matter falling onto the paper during printing.

This brings me to the end of my review of this group of printings, which covers the period to March 1895, approximately. Next week, I will examine the 1893 halfpenny provisional surcharge, which is thought to have been applied to some 20,000 stamps, which were either on hand from before 1893, or were made for overprinting. Studying these and matching them to the printings already identified will help identify those printings from this group that were made between 1891 and 1893.
Lagos - 1887-1903 Crown CA Issue