Here They Are: The Two Rarest Stamps of Lagos... 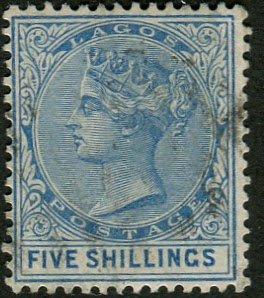 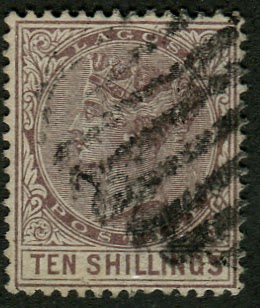 I have read in several sources that there were no more than 480 or so of each of these two stamps printed. Given that these were printed in panes of 60, that means there were no more than eight sheets issued. They were issued in October 1886 and were in use for less than 6 months, before being replaced by the bi-coloured stamps in March 1887. How many of these have survived since then is anyone's guess. However, I will note that the vast majority of the stamps that I have seen offered for sale are mint. Used copies seem to be very rare, and when they are found, they generally are heavily cancelled - much more so than the 10 shilling value shown above. While it may not score top marks for eye appeal, it is a very sound and presentable example of this very rare stamp.