December 19, 2017
Today's post will be my last for 2017, as I will be off for the Christmas holidays for a few days to catch my breath and spend some much needed time with my family. My next post will be published on January 2, 2018, and should complete my examination of the stamps of this denomination.

Otherwise, most all of the finer details of the design remain crisp and clearly visible. Sometimes, there is almost no detail in the hair at the back of the head, but there is only a small amount of merging of the top hairlines. These are also from the third state of the plate. 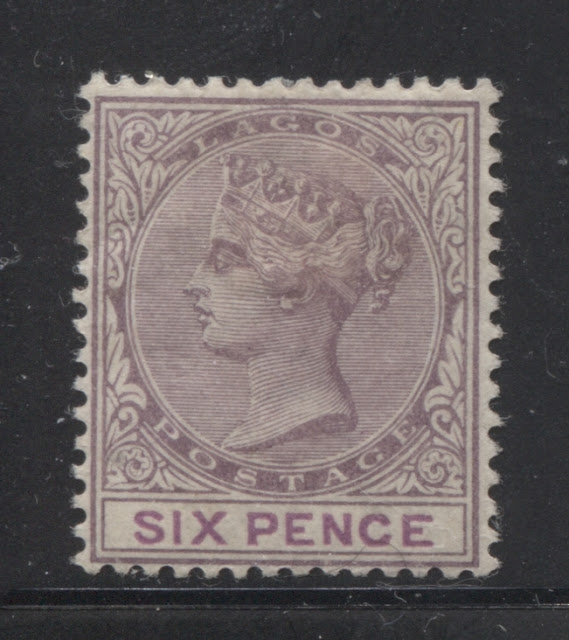 The shades for both the frame plate and the duty plate of this printing are identical to the last, with the frame plate being a dull reddish purple, and the duty plate being almost an exact match to Gibbons's purple, with the colour being just a touch brighter. The purple would appear to be an aniline ink, as the colour is quite suffused on the front, and shows very clearly through the back. I have just one mint example, as shown above, and one used example, as shown below: 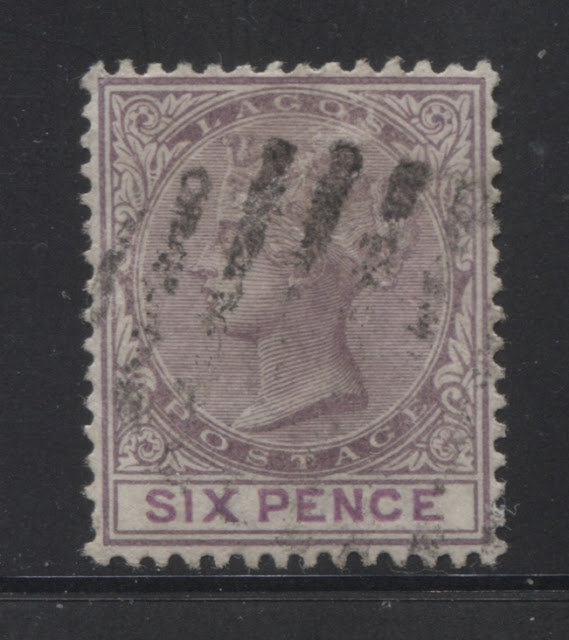 From the size and spacing of the bars, as well as the fact that I can clearly see 8 bars, and the seventh is quite large, it is probable that this stamp is canceled with either a 9-bar Ibadan barred oval, or, possibly the scarcer 10-bar type. It is too wide to be the more common Lagos type. 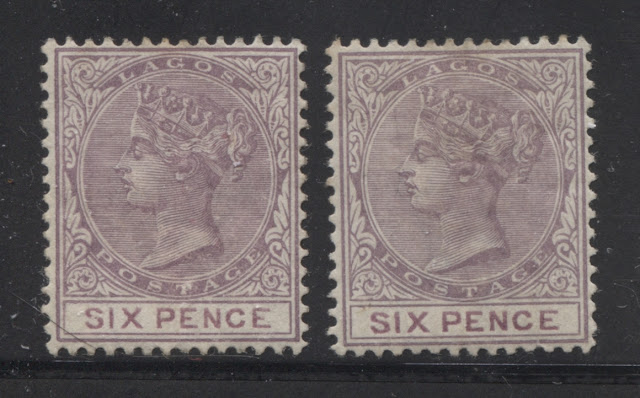 The choice to classify this as one of the earliest printings in this group is based on a used example shown below, which is cancelled with a lovely strike of a Lagos CDS, dated October 7, 1892. The head plate colour for this printing is a close match to Gibbons's reddish lilac, but is deeper. The duty plate colour is an exact match to Gibbons's plum. I have two mint examples, as shown above, and three used examples, as shown below.

This printing includes another potentially constant plate flaw involving the "S" of "Six". This time the S is broken in the middle, where a large part of it is missing. A close-up of this is shown below. 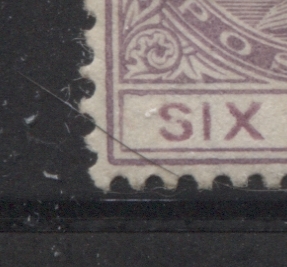 This is the first such example that I have seen on any six pence stamp. So it is quite possible that it is a one-off instance of bad ink transfer, rather than a constant flaw, but it is still interesting and worth pointing out. 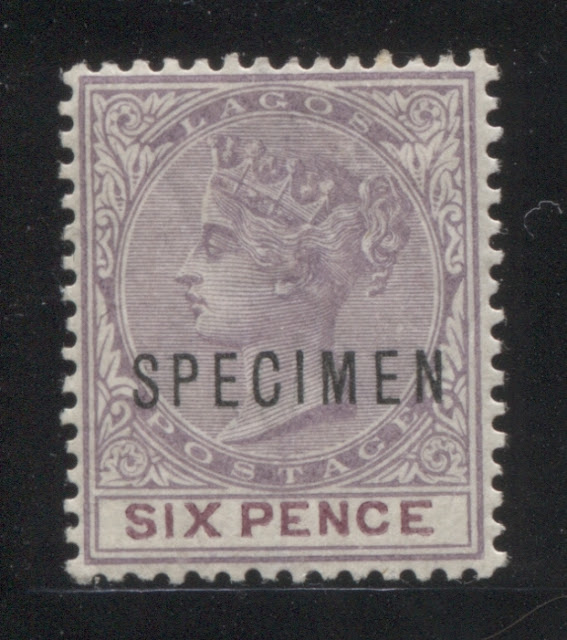 I have the sole mint example shown above, with a specimen overprint, and two used examples shown below: 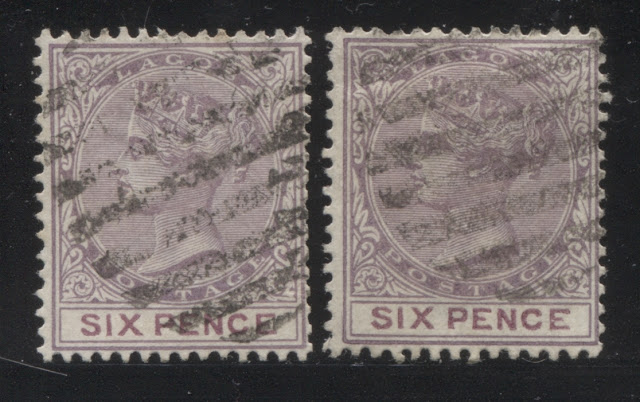 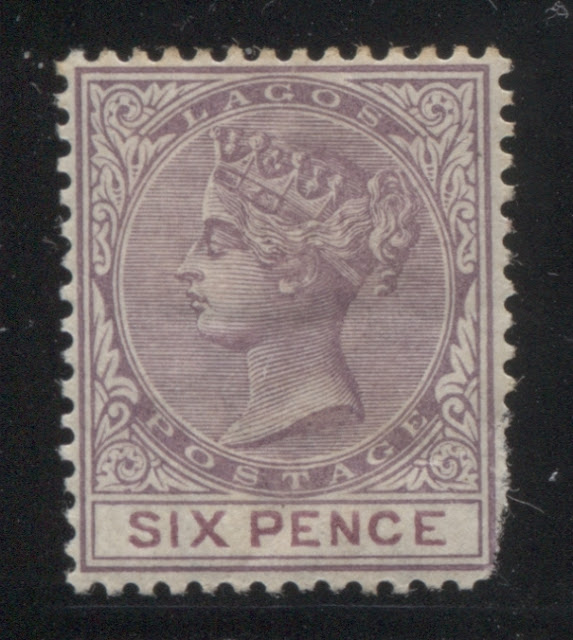 Unfortunately I do not have any sound examples of this printing, either mint or used. The mint stamp above is severely damaged on the lower right, but I have kept it as a placeholder for this printing. 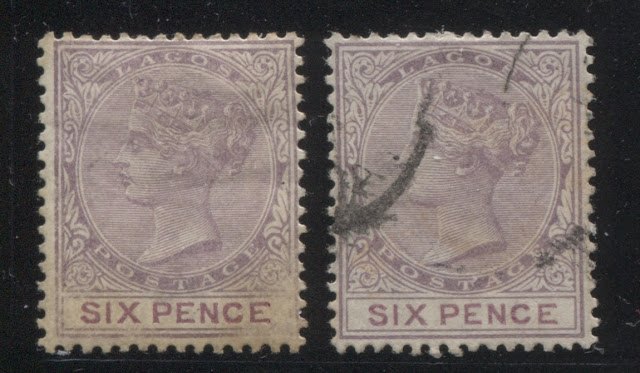 I have the somewhat faulty mint example (rubbing and discolouration) shown on the left above, and a sole used example, shown on the right. The used example appears to be cancelled with one of the 21 mm Lagos CDS cancels, but no date is visible. However, given that these cancels had more or less disappeared by 1897, it is likely dated before then.

The head plate colour of this printing is similar to a deep reddish lilac, but there is a slight brownish undertone to this colour, which makes it appear duller. So I would call it deep dull reddish lilac. The duty plate colour is problematic. It has a definite claret or brownish undertone, but it is far too purple to be a match to any of the clarets, brown purples or reddish purples on the Gibbons colour key. The closest match is again to deep purple. So I would call this colour deep brownish purple.

I have three mint examples of this printing, and one faulty used example, as shown above. The used stamp is cancelled with some type of barred oval obliterator, though it is difficult to make out which type it is. 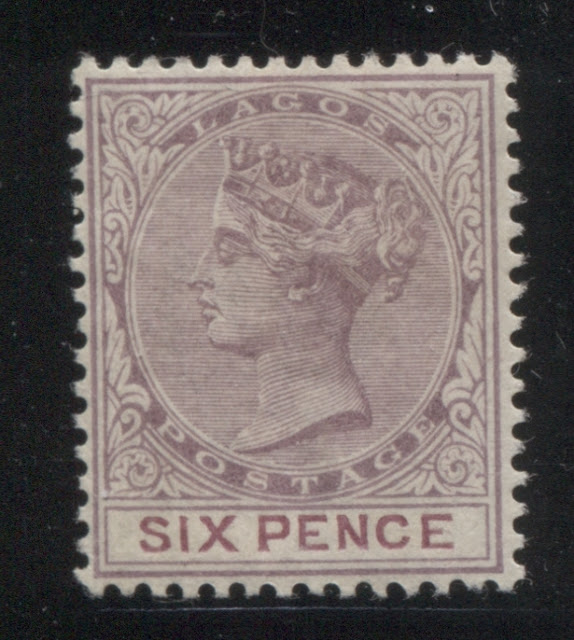 On this printing, the head plate colour is too purple to be any of the lilac shades. It is similar to the deep dull reddish lilac in the printing above, but it is paler. It is actually closest to what the plum shade would look like if it were both paler and duller. The duty plate colour is a very close match to Gibbons's plum shade, but the colour is slightly paler.

I only have the single mint example shown above, and no used examples. 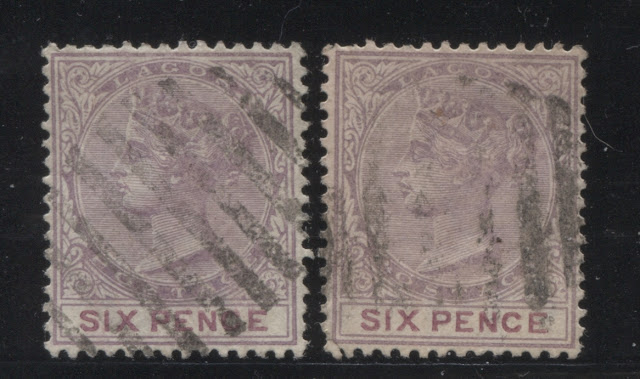 On this printing, the head plate colour is a deep reddish lilac, and the duty pate colour is almost an exact match to Gibbons's plum shade. 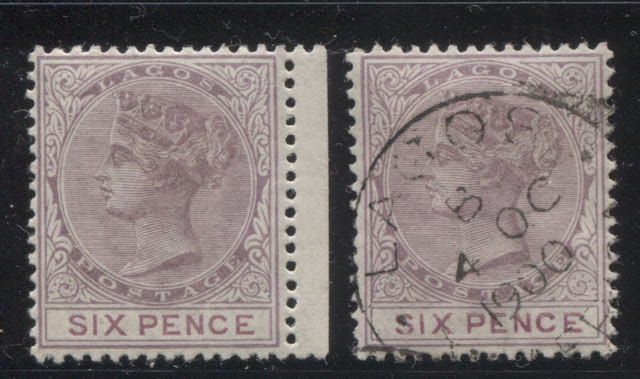 The head plate colour of this printing is the pale dull plum of the twenty sixth printing above, but the duty plate colour is closest to Gibbons's deep purple, but just a touch paler.

I have the beautiful mint NH example shown above, which is from the right side of the sheet. and the attractive used example on the right, which has been canceled with a 24 mm Lagos CDS cancel dated October 4, 1900, which suggests that it is a late usage. This stamp shows another possible constant plate flaw involving the "S" of "Six". In this instance, the "S" is broken along the bottom stroke in the middle. A close-up scan showing the damage is shown below: 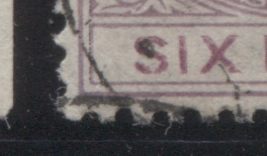 Like the other flaw involving the "S" from this group of printings, this is the only example that I have. So it might not be constant. But regardless of whether or not it is constant, it is interesting and worthy of mention. 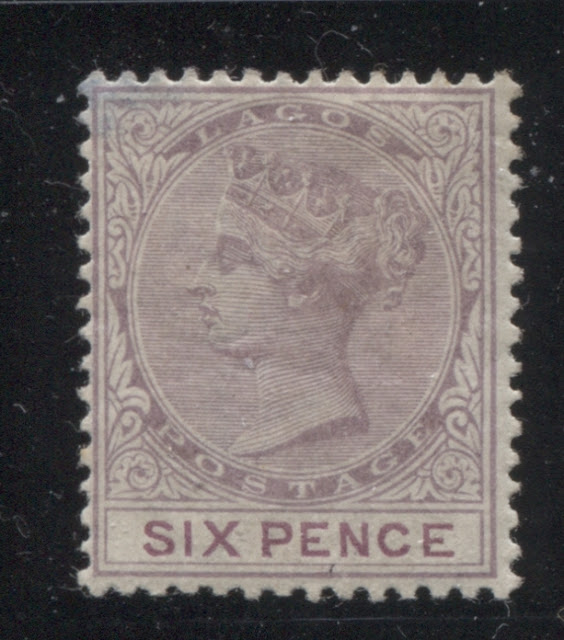 The frame plate colour of this printing is closest to Gibbons's reddish lilac, but is quite a bit duller. The duty plate colour is similar to the last printing, being closest to deep purple, but just a touch paler.

I do not have any used examples of this printing, only the single mint example shown above. 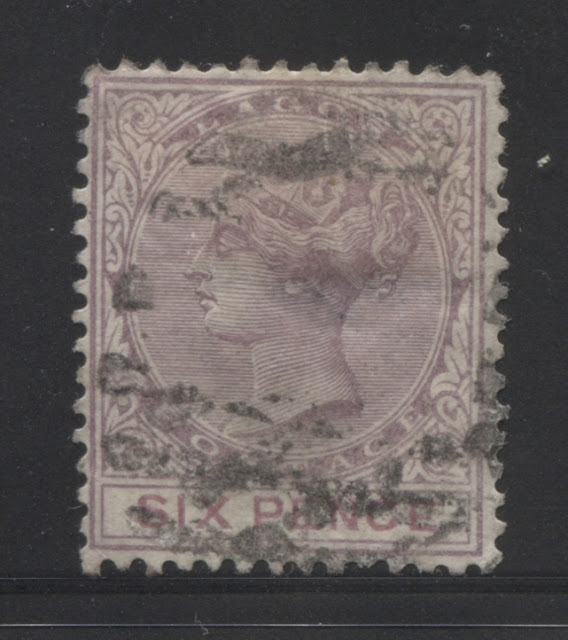 This is another printing for which I do not have any sound examples, mint or used. The used example shown above is very severely thinned in the centre. It is cancelled with a barred oval obliterator, but it is difficult to be sure which one it is. 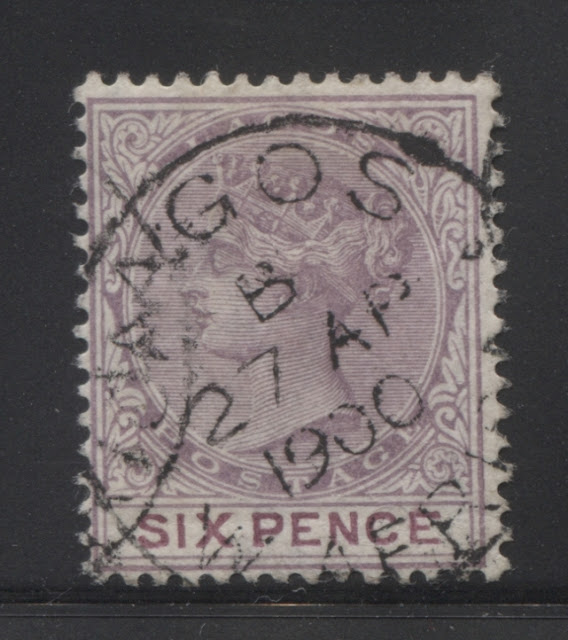 I do not have any mint examples of this printing, but I do have the superb used example shown above, which has been cancelled with a lovely strike of a 24 mm Lagos CDS dated April 27, 1900. Again, this would appear to be another example of a late usage. 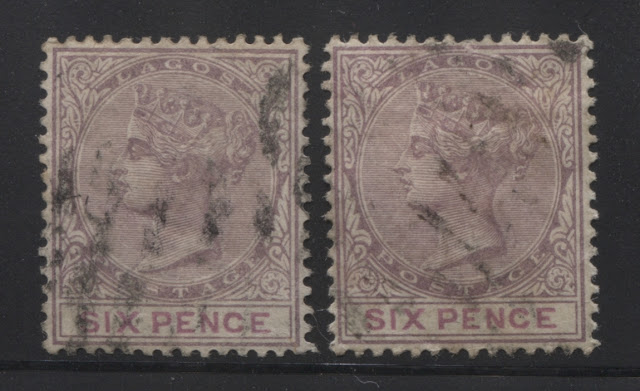 This is another printing of this stamp for which I have no mint examples and only the two used examples shown above. The head plate colour on these is a deep reddish lilac that is somewhat dull, while the duty plate colour is closest to Gibbons's deep mauve.

Both stamps are cancelled with barred oval obliterators, though it is difficult to determine anything beyond that with any degree of certainty.

This is one of the last printings of the third state, as we see the beginnings of plate corrosion and damage that begin to make the overall printing appear a little coarse. In this printing, the head plate colour is closest to slate lilac, but paler, so a pale slate lilac. The duty plate colour is, like the last printing, closest to Gibbons's deep mauve.

I have two mint examples, both shown above, and a single used example, cancelled with a 24 mm Lagos CDS dated June 19, 1901, which suggests a late usage of this later printing, which should have been issued sometime in early 1896 or 1897. 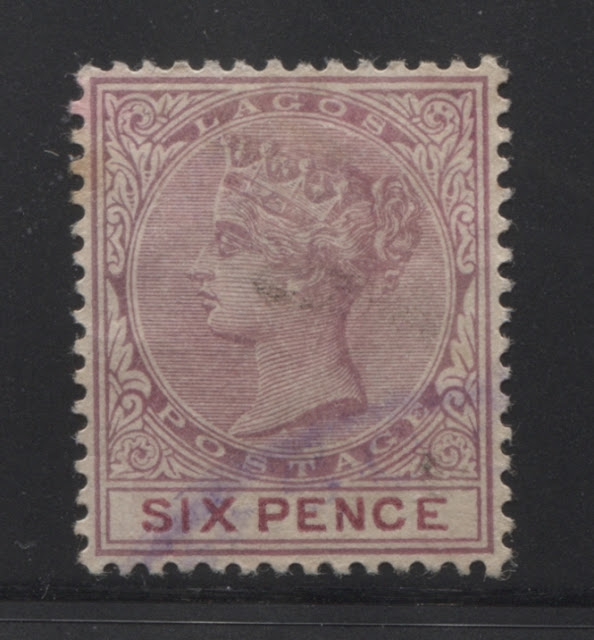 This printing may in fact, not be a true printing, but might be a colour changeling caused by exposure to water, given that it does appear to have been soaked, and these inks are doubly fugitive, which means that they are affected by water. The head plate colour is a closest to Gibbons's deep claret, which is quite unlike any shade on any of the other printings. The duty plate colour is closest to brown purple, but a little deeper.

I have only the single used example shown above, and it has been cancelled with an indistinct type of what appears to be a rubber postmark. It is smudgy and not possible to identify unfortunately. There is a possibility that it was applied posthumously to a mint stamp as well.

This example shows another example of the "Broken S" flaw, with the nick out of the bottom of the "S" being in exactly the same place as the stamp from the 19th printing that showed the same flaw.

A close up scan is shown below, which clearly shows the flaw: 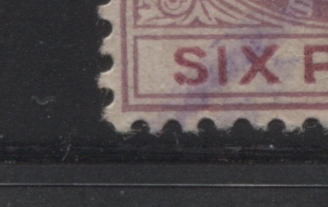 The existence of this, and the other examples revealed so far, proves that this is a constant plate flaw.

This brings me to the end of this week's post, and my series of posts for 2017. In January 2018, I shall finish my discussion of this value from the series, and will move on to the one shilling value. Happy holidays to all my readers, and spend plenty of time studying and enjoying your stamps!